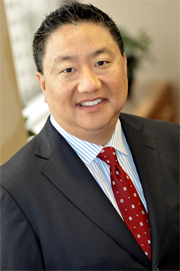 Wing’s colleague and long-time friend, Michael C. Cho, esq.  joined the discussion. Michael is an attorney with a busy practice in the hospitality industry in Southern California and is an expert in liquor license issues. He’s also a wine aficionado and was part of the festivities at Kosta Browne Wines. He was serving Wahoo’s fish tacos alongside Wing to the hungry and appreciative guests.

Mike shared the story of the founding of Wahoo’s by Wing and his brothers Ed and Mingo. Their father owned the iconic Shanghai Pine Garden Chinese Restaurant on Balboa Island where they worked when they were in high school. John Wayne was a regular.

When Wing rejoined the discussion he talked about the upcoming OC Wahoo’s 5K this Sunday, May 5th at the OC Fair & Events Center. It’s part of the OC Marathon and Half Marathon Day Experience. Wing will sound off the gun at the race’s start.

The first 800 finishes will get a free Wahoo’s Fish taco and everyone 21 and over gets a free beer!