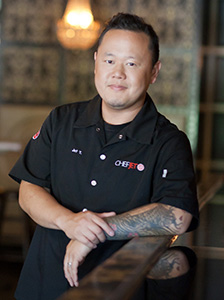 Congrats to our own Jet Tila. On Friday at a special ceremony and luncheon at Los Angeles City Hall Jet was presented with the “L.A. Dreamers Award” by Mayor Antonio Villaraigosa as part of Asian Pacific American Heritage Month.

Right afterwards he headed to the KCAL 9 studios on the CBS Lot in Studio City to do a live cooking demo of his signature Thai green papaya salad for the afternoon news!

Last Sunday working with the culinary team at Cook’s County, Jet (with some help in the booth from the team at Melissa’s) competed in the prestigious L.A. tour stop of Cochon 555 at House of Blues in West Hollywood. He used an entire heritage Berskshire pig from Cook Pigs Ranch to prepare 5 spectacular dishes for the judges and the 400 attendees to savor, taste, and judge.

In a tight finish Chef Ray Garcia of FIG Restaurant at the Fairmont Miramar Hotel in Santa Monica came out on top. In June he heads to Aspen, Colorado and the Aspen Food & Wine Classic to battle in the finals on June 16th!