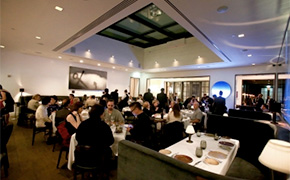 Jet recently experienced the renovated Spago Beverly Hills which remains one of the bastions of fine dining in the West. The new look is more retro in the style of AMC’s “Mad Men” series. The servers are smartly attired in vests with ties.

Serving portions are by the numbers. One’s are the appetizers. Two’s are small plates and Three’s are big plates which you can share. Standouts for Jet are the grilled corn agnolotti and the veal steak tartar. Expensive but worth it… 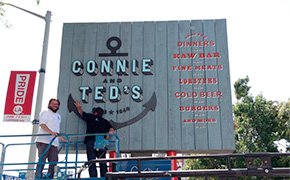 Producer Andy reported on the new Connie & Ted’s on Santa Monica Blvd. in WeHo. This is Celebrity Chef Michael Cimarusti’s (Providence) greatly anticipated East Coast / New England-style seafood “shack” with his front of the house partner from Providence, Donato Poto, one of the most welcoming in the business. It’s housed in an architecturally significant new building. The front looks like a wave and the inside has the feeling of openness with an open kitchen.

Producer Andy was particularly taken with their lobster roll. You can get it hot or cold but Andy commented on the hot variation which is poached lobster served on a house-baked, toasted hot dog –style bun slathered in drawn butter. All breads and rolls are baked in-house including the oyster crackers for the three versions of clam chowder.