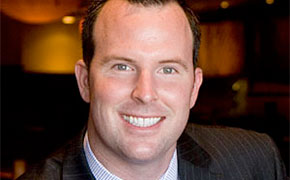 Restaurateur Russ Bendel (and partners) are the respected operators of Ironwood (Laguna Hills), Olea (Newport Beach) and Vine (San Clemente) in Orange County. Russ was awarded Restaurateur of the Year honors at this year’s Golden Foodie Awards. Ironwood has a new lounge.

Russ Bendel was born and raised in Philadelphia and relocated with his mother, father, and sister to California when he was a child. Russ grew up in the restaurant industry and always knew it was in his blood at an early age.

He earned his Bachelor of Science degree from The Collins College at Cal Poly Pomona with an emphasis on Restaurants and Business Management. During that time, Russ worked with Bloomin Brands Restaurant Group for 15 years, six years with Outback Steakhouse and nine years with Fleming’s Prime Steakhouse & Wine Bar. He was promoted to partner of the flagship Newport Beach location at the age of 25, youngest ever in company history.

Chef-Partner Jared Cook was born and raised in the Pacific Northwest. After graduating from Western Culinary Institute in Portland Oregon, he relocated to Southern California. Since then Jared worked in restaurants such as French 75 in Laguna Beach, Chat Noir in Costa Mesa, and was promoted to Executive Chef at the Crow Bar and Kitchen, in addition to working at Vine Restaurant & Bar for the third time as a Cook, Sous Chef, and now Executive Chef.

Russ again joins us with Chef-Partner Jared Cook to continue their chat about the Holiday menus at Ironwood, Olea & Vine.