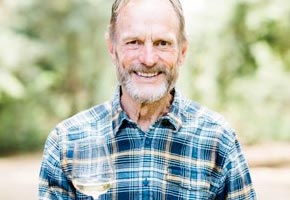 “Alma Rosa Winery was founded in 2005 by California wine industry pioneer Richard Sanford and his wife, Thekla. They named the winery after the 1839 Rancho Santa Rosa land grant that historically encompassed this region of Santa Barbara County. Richard Sanford was the first to plant Pinot Noir in the area in 1971 after detailed research of climate and geologic records. Richard went on to launch two wineries before creating Alma Rosa (which he sold in 2015.)” Today Richard serves as Founder and Winery Ambassador for Alma Rosa Winery. Richard pulls the cork on Alma Rosa for us.

“Richard Sanford was inducted into the Vintner’s Hall of Fame in 2012 for his contributions to the California wine industry. Following his service in Vietnam, Richard Sanford dreamed of discovering a West Coast climate zone similar to the Burgundy region of France and producing wine that would rival the best in the world. With a degree in Geography from UC Berkeley, he identified a remarkable geographic anomaly: the transverse mountain ranges of California where the valleys open to the west, allowing cool maritime air to moderate the growing climate.”

“After locating acreage with well-drained soils in the targeted climate zone, Richard planted the first Pinot Noir vineyard in the Central Coast in 1971 — the Sanford & Benedict Vineyard. A decade later, he and his wife Thekla founded Sanford Winery, where they produced award-winning wines for over 25 years.”

Richard invites listeners to visit for a sit-down tasting experience in Alma Rosa Winery’s stunning Buellton tasting room. Guests are able to enjoy the Alma Rosa wines in a welcoming and well-appointed tasting room that is comfortably furnished and filled with the beautiful natural light of Santa Barbara County. They offer a rotating selection of 5 wines to taste from their portfolio of Pinot Noirs, Chardonnays, Rhone varietals and sparkling wines.