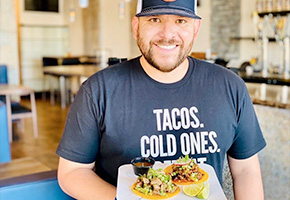 Restaurateur Jesse Galvez and his partner Chef Manny Velasco, who was honored as the Golden Foodies 2017 Rising Star Chef of the Year, were at the forefront of the food truck trend when they started Sol Agave as a taco truck in 2015. They attracted such a loyal following for their elevated Mexican cuisine that they decided to open a restaurant in San Juan Capistrano in 2016. The success of that original location lead to moving into a larger space within the same retail center just a year later.