Happy Father’s Day to all the wonderful Dads out there. 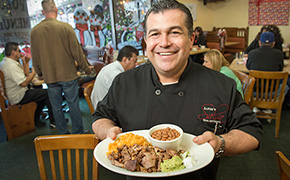 Anne Marie Panoringan is Voice of OC’s well-informed food columnist. She reports industry news, current events and trends. Panoringan’s prior efforts includes writing about food for 8 years at the OC Weekly in which she interviewed more than 330 chefs, restauranteurs and industry professionals for her weekly “On the Line” column. Anne Marie’s work has been recognized by the Orange County Press Club. Since dine-in is now back in Orange County Anne Marie has been making the rounds to observe the “new normal” in dining. She joins us to share how OC restaurants are adapting while creatively surmounting numerous obstacles.

For 15 years, Providence in Hollywood has elevated the standard of modern American seafood restaurants with exemplary service. Newly reopened for dine-in guests can again experience Chef Michael Cimarusti’s award-winning cuisine in the heart of Los Angeles, welcomed by one of L.A.’s legendary hosts, co-owner Donato Poto. Restaurateur Donato Poto is with us to reminisce, celebrate the 15th Anniversary and look to the future.

Our own Chef Andrew Gruel of the Slapfish Restaurant Group provides another timely and informative “Ask the Chef” segment where Chef Andrew responds to listeners thoughtful inquiries. Chef Andrew is updating us on the impact of the Covid-19 crisis in the hospitality field and what we, as diners, can do to support the very survival of restaurants. Dine-in is slowly starting to come back but with a lot of new rules. Alternately Take-Out / Delivery when you can surely helps… It’s Father’s Day so as a proud Dad, Chef Andrew has some thoughts on taking care of Dad on his special day. Bet there are some handy Father’s Day cooking tips along the way, too. Also an update on the favorable pricing of fresh lobster right now. We’ll, of course, “Ask the Chef.”

Locally owned and operated, The Upper West opened its doors in 2010 and not long after its arrival on Pico Boulevard in Santa Monica has emerged as a consistent local favorite.  Upper West’s ever-changing menu draws inspiration from around the world while maintaining eclectic flavors of Chef Nick Shipp’s very own. We pull Chef Nick away from his newly reopened kitchen for a chat.

Palm Springs resident Tara Lazar is the Founder of Foundation 10 Creative, a prominent, and growing, hospitality group in Palm Springs. Over the past decade, Tara has created a small empire of iconic restaurants in the ever-growing travel destination of Palm Springs. Under the F10 family is the prominent brunch hotspot Cheeky’s, the handsomely appointed modern steakhouse Mr. Lyons and their classic cocktail hideaway Seymour’s, a lively and al fresco Italian eatery Birba, and the sleek and serene 34-room boutique hotel, Alcazar. Tarajoins us to talk about the reopening of all the distinctive properties.

All of this and heaping helpings of extra deliciousness (with proper Social Distancing) on this week’s not-to-miss show!