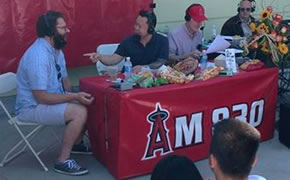 A few months ago he launched the far more casual Connie & Ted’s (a New England-style seafood shack) in West Hollywood. It’s been an instant hit with the critics and the crowds just keep on coming.

Michael provided some great tips on selecting and preparing lobster.