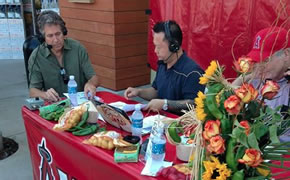 Mr. Davis was a 21-year veteran of Ralphs before joining Bristol Farms as executive vice president in 1996. He was later named President and CEO in 1997. In 2010 Davis and his management team purchased the 12-store Bristol Farms and returned it to local ownership. They also own the popular Lazy Acres stores in Santa Barbara and Long Beach.

The Santa Monica store represents something very special for Bristol. There is more selling space there than in the other stores. Also in addition to the signature fresh foods there are more everyday household items available so the store is designed as a one-stop shop for all of their customers’ needs. It has the largest wine department of any of their units and also has an in-house smoker for meats. Think chicken and brisket…