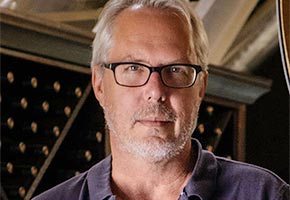 “Doug Margerum (Margerum Wine Company) has been involved in the Santa Barbara food and wine scene for over 35 years. Upon graduating from the University of California, Santa Barbara in 1981, his family purchased WINE CASK. In 1994 the WINE CASK became one of 74 restaurants in the world to earn the Wine Spectator Grand Award. Doug sold the WINE CASK in 2007.”

“In 2014, Margerum released BARDEN wines – an exploration of cold climate grapes grown in and around the Sta. Rita Hills AVA. BARDEN is Doug’s middle name and its English meaning is “Lives near the boar’s den”… thusly they have adorned the label with an image of the wild boar that is pervasive in the area’s vineyards.”

“BARDEN Wines Mission Statement: BARDEN is the dream to make the ultimate expression of grapes grown in the Sta. Rita Hills AVA. Our access to the top vineyards along with the philosophy and knowledge gained over thirty years in the wine business allows us to make world-class wines. BARDEN’s English meaning is “Lives near the boar’s den” … thusly we have adorned the label with an image of the wild boar that is pervasive in the Sta. Rita Hills.”

Doug Margerum pours a glass of Barden Pinot Noir, Sta. Rita Hills and continues with us explaining all that is BARDEN wines.