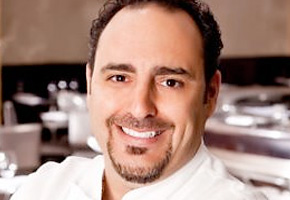 “Evoking a throwback vibe worthy of Downtown Las Vegas’ legacy, Barry’s brings back guests to the classic cool of the 50s and 60s where great music and sounds of clinking martini glasses filled the air, the chef greeted you at the table, the polished bartender knew your favorite cocktail and everyone felt like a VIP.”

“After leaving New York in 1999, Chef Dakake was commissioned by Chef Charlie Palmer (Aureole) to open Aureole at Mandalay Bay Resort & Casino in Las Vegas, followed by Charlie Palmer Steak, the first independently owned restaurant ever to be located in a Four Seasons Hotel. Chef Barry then brought his talents to be part of the opening team of N9NE Steakhouse at the highly anticipated Palms Resort Casino in 2001.”

“In 2017, N9NE Steakhouse closed it’s doors after 16 years to make way for a new concept, which Chef Dakake facilitated. As Executive Chef for Scotch 80 Prime he played an instrumental role in putting the restaurant on the Vegas dining map. Since then Chef Barry has joined with Yassine Lyoubi, Marco Cicione and Donnie Rihn to bring the ambitious Barry’s Downtown Prime to life at Circa Las Vegas.”

Chef Barry continues with us, fresh Maine lobster in hand.