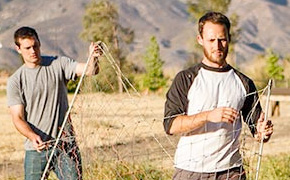 “Farmer Paul” Greive, the co-founder with his in-laws, of Primal Pastures in Temecula was with us. Primal Pastures is a pastured, “beyond organic and sustainable” livestock farm with an incredible back-story.

They just funded an amazing Kickstarter campaign to bankroll their expansion. The goal was to raise $40,000. Instead they realized $57,810.

They have recently leased over 200 acres of pastureland to grow. Their basic concept is to raise livestock the way it was done in pre-factory farm days. It’s simpler and far easier on the land.

“Our vision is to establish a “permaculture” – a system that effectively models the natural ecosystem with many varieties of plants and animals acting in synergy with one another on one farm. There are beautiful things that happen when cattle and sheep are incorporated with chickens, turkeys, and ducks.”