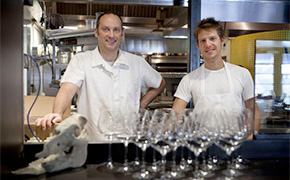 Steve Samson and Zach Pollack are the Executive Chefs and co-owners of Sotto near Century City in Los Angeles. They have an incredible wood-burning pizza oven that is from Sicily that was installed by Italian craftsmen. Orange County foodies remember them as the well-received opening culinary team for highly-regarded Pizzeria Ortica.

In-mid-August they were the only Los Angeles chefs to be invited by Chef Javier Plascencia (the Wolfgang Puck of Northern Baja) to join with acclaimed San Diego chefs to prepare a seven-course, wine-paired meal at Chef Javier’s ranch, Finca Altozano, located in the Guadalupe Valley, Mexico’s premier wine region. Each course was matched with an appropriate Baja wine from the local region. This was one event as part of a bigger annual, week-long vintners’ festival.

Steve’s and Zach’s dish was a beautiful, rustic spit-roasted lamb loin with Summer vegetables from the legendary Chino Farms in Rancho Santa Fe.

Restaurateur Javier Plascencia has Romesco in Bonita (right near the border) in the United States, and multiple restaurants in Tijuana including Mision 19 and Caesar’s Restaurante Bar (where the original Caesar Salad was created.)