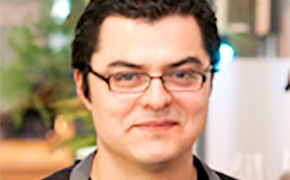 Carlos is a trained pastry chef with extensive experience in fine-dining establishments in the Bay Area. Carlos returned to Orange County and with his sister, Silvia, launched a gourmet food truck, Taco Maria, in 2011.

In it’s first year Taco Maria was awarded the distinction of being named one of OC’s best new restaurants by both The Orange County Register and OC Weekly.

Taco Maria earned great acclaim as the featured gourmet food truck at the Saturday morning Farmers Market at SoCo. The lines were long (everything was created fresh to order) and the devoted following huge!

Last year Carlos sold the food truck to create a real destination restaurant at SoCo. Taco Maria opened in September for dinner only and just recently added lunch. Weekend brunch is planned for the near future. A beautiful patio overlooks the garden courtyard adjacent to The OC Mart Mix.

It’s an open kitchen so you can see the craft and care which goes into the preparation of each dish. Even the tortillas are hand-made and prepared throughout the day.