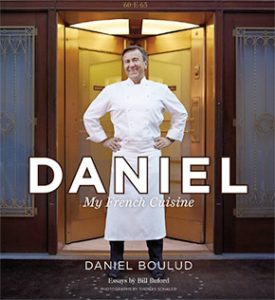 Daniel touched on the part of his book focusing on what he prepares at home when he’s cooking more casually for friends. It is four seasonal menus from his personal favorite French culinary regions including his native Lyon.

Chef Boulud is making a rare appearance in Los Angeles the Week of October 21st supporting the release of the cookbook.

On Thursday, Oct. 24th at Noon, Chef Daniel will be signing copies of DANIEL: My French Cuisine at Whole Foods at 6350 W. 3rd St. in Los Angeles across the street from the Original Farmers Market at 3rd and Fairfax.

Finally that evening he will be in conversation with the notable Los Angeles Times restaurant critic, Jonathan Gold, at the William Turner Gallery at Bergamot Station Arts Center in Santa Monica. The talk is at 8:00 p.m. with an earlier reception running from 6:30 to 7:30 p.m. There are reserved as well as General Admission seats.