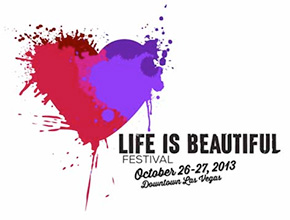 You’ve been asking for it so here it is….Our first Las Vegas Special!

Jet was in Las Vegas the weekend of October 26th & 27th as a participant in the giant “Life Is Beautiful” Music and Food Festival using an event area encompassing 15-blocks of Downtown Las Vegas. The storied El Cortez Hotel and several popular new restaurants were actually part of the Festival area.

Something like this on the scale that it represents has never really been tried before…Unusually the food and beverage component shares the spotlight with the music.

The biggest names in the culinary world like Tom Colicchio were all there. Some performed cooking demos at the Chefs on Stage area (in an air-conditioned tent with giant screen video monitors) and others served up their extraordinary signature dishes in the Culinary Village. 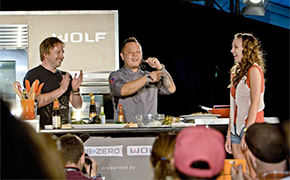 Saturday afternoon at 4:45 p.m. Jet was on the Chefs On Stage East with of Ben McKee of Imagine Dragons.

Jet was also in the Culinary Village represented with a Kuma Snow Cream station. It was one of the most popular food items enjoyed at The Festival. Jet was delighted to say hello to so many fans of the show who were in attendance.