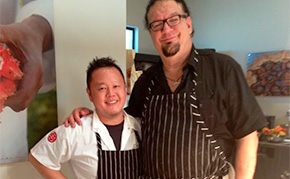 In the world of stage magicians there is no enduring act quite like Penn & Teller. Fortunately there is comedy, too. Las Vegas is the ideal base for these two performing vets. Their home, since 2003, is at The Rio just off The Strip.

What the general public doesn’t know is that Penn Jillette is an accomplished home cook. Jet has been cooking with him recently and Penn was our very special guest.