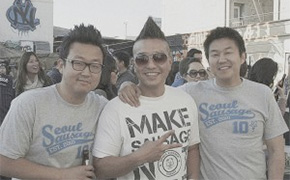 A little over a year ago those three wild & crazy, youthful Korean-Americans (Ted and Yong Kim and Chef Chris Oh) opened the Seoul Sausage Co. in Little Osaka, West Los Angeles. They are known for melding distinctive Korean flavors into American sausages. Their other signature item is the “flaming balls.” Korean Fried Chicken (KFC) with corn bread is another specialty.

Seoul Sausage Co. opened right after the three partners won Season 3 of Food Network’s “Great Food Truck Race“. First prize was a cool $50,000 and the new food truck they took across the country on the series. It’s affectionately known as “Big Mama.” The “Flaming Balls” was a dish (think giant Korean suppli with dipping sauces) created by necessity in an intense competition on “Great Food Truck Race.”

The (always entertaining) Seoul Sausage Co. guys are with us to talk about the sweet ride that has been the last year. The lines are still out the door.

There’s more…Young, Ted, and Chef Chris also have some exciting news to share with the listening audience. It’s a “SoCal Restaurant Show” exclusive…