Barbara has recently been in San Francisco over a couple of trips and shares some great dining in the City by the Bay.

Barbara’s first recommendation is the bit over a year old Rich Table in Hayes Valley. The principals are Evan and Sarah Rich. They are alums of Michael Mina, Coi and Quince so the credentials here are impressive. 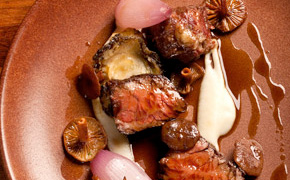 Central Kitchen is a new establishment from the team behind the incredibly popular Flour + Water (known for Neapolitan pizza.) Thomas McNaughton is the executive chef of both establishments. Barbara singled out the hen roulade with cauliflower, potato purée & oyster relish as a standout dish.

April Bloomfield of Spotted Pig in Manhattan fame has come West to revitalize the faded North Beach classic, Tosca Cafe. Spotted Pig was a pioneer of the now popular gastropub movement. Tosca has been cleaned up while retaining its classic charm with a new contemporary Italian menu. Added to the bar is a meat slicer and antipasti station. The kitchen was totally rebuilt and now is open.

Barbara suggests the fried artichokes appetizer and the chicken liver.