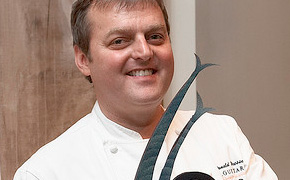 There really is no finer pastry chef in America than the pleasantly low-key Donald Wressell. He was the opening executive pastry chef at the Four Seasons Los Angeles at Beverly Hills. This is the luxury property where the majority of the out-of-town Academy Award nominees stay leading up to the Academy Awards presentation at The Dolby Theater. Every year Chef Donald would create incredible individual chocolate show-pieces celebrating each of the “Best Picture” nominees. These elaborate pieces where then featured, via photography, in the Oscar coverage beamed across the globe.

Donald has competed in the most prestigious international pastry competitions and, most recently, has coached, too. He’s judged pastry chefs for serious competition shows on Food Network.

He’s currently the pastry chef for the proudly American chocolate company, Guittard Chocolate Co. Guittard is based in Burlingame but Chef Donald has a test kitchen and research facility here in Los Angeles. He also teaches classes for professional pastry chefs and candy makers. Guittard has been Family-owned for five generations.

Towards the end of the first quarter of 2014 he’ll create the sure to be dazzling Birthday Cake for The City of Beverly Hills’ 100th Anniversary. Chef Donald baked another cake spectacular for Beverly Hills’ Diamond Jubilee 25 years ago while he was at The Four Seasons.