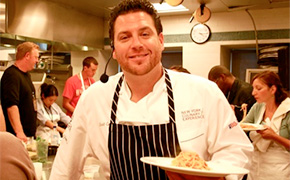 The Scarpetta Cookbook (his third) is just out for the Holidays. His goal is that the reader will really be able to recreate his restaurant dishes by following the recipes.

Chef Scott is familiar to millions of viewers of food television as one of the original permanent judges on Food Network’s “Chopped.” His well-established judging style is to be honest but not hurtful.

“Chopped” is probably the hardest legitimate cooking competition series on the air. As Scott explains it’s all real. None of the competing chefs have a clue as to what’s in their mystery basket of ingredients until they open it! Chef Scott reveals that “Chopped” has just been renewed for three more seasons.