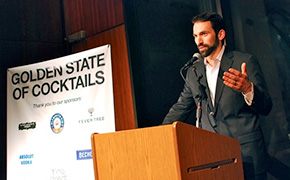 Skyler Reeves is a master barman. Denizens of Downtown Los Angeles’ popular nightlife scene will know him from 213 Downtown. He’s one of the best…

His new project is co-producing the upcoming “Golden State of Cocktails.” It takes place January 27th through 30th primarily on the historic top floor of the Los Angeles Times Building in Downtown Los Angeles. This space was the former executive offices and the grandeur of the floor will surely impress. The educational event is designed exclusively for the trade.

“California’s long awaited large-scale cocktail event is finally here: Announcing Golden State of Cocktails! Staged in Los Angeles, the West Coast’s largest city and California’s anchor, Golden State of Cocktails celebrates all aspects of cocktail culture, both industry and consumer, from San Francisco to Los Angeles to San Diego and everywhere in between. Be a part of the inaugural event in one or more ways. From experiential interactive labs, take-away stations and brand immersion rooms, Golden State of Cocktails takes a hands-on approach to the learning experience and celebrates the best of what California cocktail culture is all about.” The event is open to restaurateurs, chefs, bartenders and people associated with the trade.