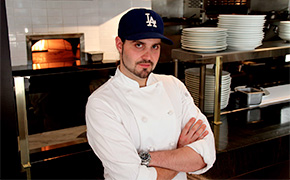 Doma Beverly Hills opened rather quietly at 362 N. Camden Dr. in Beverly Hills in 2012. The address is well-known as the long-standing former home of Prego.

What’s creating a lot of excitement there with foodies is the young executive chef, Dustin Trani. He’s all of 29 years-old. He has worked at a Michelin starred restaurant in Italy, cooked at the Oriental Hotel in Bangkok, and was chosen by the Governor to represent California in a prestigious national seafood competition in New Orleans.

He’s a 4th generation Los Angeles area Italian chef who started working at age 11 in his family’s restaurant, J. Trani’s, in San Pedro which opened in 1925. He’s also a C-CAP alum (Careers through Culinary Arts Program in High School.) His food is contemporary Mediterranean/Italian with an emphasis on seafood.

His talented pastry chef is Marissa Sharon previously at Scott Conant’s Scarpetta in Beverly Hills. Her mini-cannoli is a real standout.