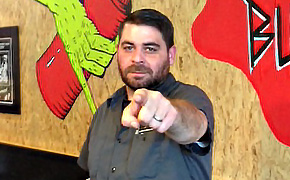 One of the very first “better burger” food trucks in Los Angeles County, Grill ‘em All Burgers, rolled onto the scene in 2009. As unusual as it sounds it was a heavy metal devotee’s take on the ample burger meal. The founders are Chef Ryan Harkins (a Cleveland native) and Matt Chernus, a former professional wrestler.

The stars were in alignment for them as they were inexplicably cast for the first season of Food Network’s cross-country “Great Food Truck Race.” This was the only season where the competitors were required to have actual food truck experience.

Although the Grill ‘em All guys were on the threshold of elimination on multiple episodes (and expected by the Producers to be out in the early going) they scrappily hung in there and came out on top at the conclusion of the high octane finale in New York! Once the season aired business was such that they needed to secure a second truck.

The gameplan was always to eventually move into the right (affordable) brick and mortar location. That happened last January (2013) when they opened in the Renaissance Theater Plaza in Alhambra in a former (failed) chain 50s diner location. Chef Ryan and Matt have made an odd location work. Grill ‘em All had lines down the block for their anniversary celebration last month. Nights and Weekends are their really busy times.

The most popular burger is The Behemoth. It’s a monster…The patty is one half-pound. It’s grilled cheese sandwich “buns” on the top & bottom, cheddar cheese, bbq sauce, pickle, grilled onion, and bacon.

Future plans include a second location in perhaps Long Beach or North Hollywood. Down the road Chef Ryan’s goal is to open a burger restaurant in his hometown of Cleveland where the dining scene is now really happening.

The remaining Grill ‘em All truck will soon be back in action for private events.