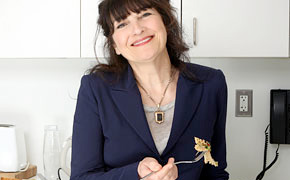 After you’ve been the esteemed editor of Gourmet Magazine and, prior to that, the powerful & influential restaurant critic of The New York Times and The Los Angeles Times what’s next? In the case of our guest, Ruth Reichl, you pen your first novel. It’s Delicious! – A Novel.

“Ruth Reichl is a born storyteller. Through her restaurant reviews, where she celebrated the pleasures of a well-made meal, and her bestselling memoirs that address our universal feelings of love and loss, Reichl has achieved a special place in the hearts of hundreds of thousands of readers. Now, with this magical debut novel, she has created a sumptuous, wholly realized world that will enchant you.

Billie Breslin has traveled far from her home in California to take a job at Delicious!, New York’s most iconic food magazine. Away from her family, particularly her older sister, Genie, Billie feels like a fish out of water—until she is welcomed by the magazine’s colorful staff. She is also seduced by the vibrant downtown food scene, especially by Fontanari’s, the famous Italian food shop where she works on weekends. Then Delicious! is abruptly shut down, but Billie agrees to stay on in the empty office, maintaining the hotline for reader complaints in order to pay her bills.

To Billie’s surprise, the lonely job becomes the portal to a miraculous discovery. In a hidden room in the magazine’s library, Billie finds a cache of letters written during World War II by Lulu Swan, a plucky twelve-year-old, to the legendary chef James Beard. Lulu’s letters provide Billie with a richer understanding of history, and a feeling of deep connection to the young writer whose courage in the face of hardship inspires Billie to comes to terms with her fears, her big sister and her ability to open her heart to love.”