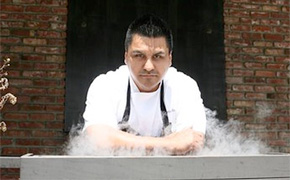 What does it take to become the Corporate Pastry Chef at the highly thought of Patina Restaurant Group? Chef Carlos Enriquez, who learned the basics of pastry in his parents Los Angeles bakery, joins us to explain. It takes more than hard work…

Chef Carlos was part of the opening team of the Paris Hotel on The Strip in Las Vegas. He then moved to Colorado to serve as Executive Pastry Chef for Sky Goble at the Brown Palace Hotel in Denver. A year later, Enriquez joined Goble at the Ahwahnee Resort in Yosemite National Park. In 2006 Chef Carlos returned to Las Vegas and worked as Assistant Pastry Chef at the Hard Rock Hotel and Casino, and later at Alex Restaurant at Wynn Las Vegas. He was Executive Pastry Chef at Café del Rey in Marina del Rey before joining the Patina Restaurant Group as Corporate Pastry Chef in 2012.

Chef Carlos was the father of twins when he still was in his late teens. He now has six children. Imagine the sacrifices involved in climbing the culinary career ladder at such a young age and having a huge family to support, too.