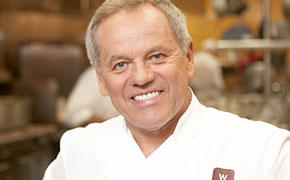 What is now known as California Cuisine never had a better day than when Celebrity Chef Wolfgang Puck opened the original Spago on The Sunset Strip in 1982. Its ambitions were modest…

Now the Wolfgang Puck Fine Dining Group has restaurants around the world with a second stronghold in Las Vegas.

Chef Puck was the first Chef to cook a meal at New York’s famed James Beard House. He is also the recipient of multiple James Beard Foundation Awards.

Another high-profile division, Wolfgang Puck Catering, provides the food for the annual Governors Ball for the Academy of Motion Picture Arts and Sciences. Wolfgang is better known internationally than many of the celebrities who he graciously serves!

Wolfgang Puck’s most recent book, Wolfgang Puck Makes It Healthy – Light, Delicious Recipes and Easy Exercises for a Better Life is a personal project for him.

In the words of Chef Wolfgang Puck :

“I never, ever expected to write this book. If you had suggested to me ten years ago, or even five, that my next book would focus on healthy recipes and fitness, I would’ve said you didn’t know me very well.

I have figured out where I can modify ingredients to make a healthier dish. And today I can eat all my favorite foods without overeating anything.

I feel good because of the combination of eating well and exercising I’ve developed. Now I want to help you achieve the same goal, to feel healthy and happy, with plenty of energy to do the things you love to do.”

Chef Wolfgang’s practical advice is to cut down on the consumption of processed foods. Work more fresh fruit and vegetables into your diet along with more fish and chicken. It’s really worked for him! He proudly keeps up with his older boys now on their skiing adventures.