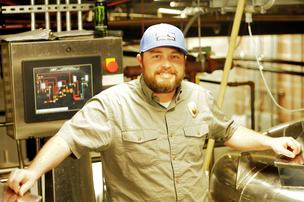 Founded in 2009 by Jason Wilson, Back Forty Beer Co. is one of the oldest Alabama breweries and the first to distribute outside of the state. Back Forty beers are available statewide in Alabama, Florida, Georgia and Mississippi. The brewery is located in Historic Downtown Gadsden, Alabama.

“In 2008, after several years in the corporate world and with over 150 brewery tours under his belt, founder Jason Wilson reached out to renowned Brewmaster Jamie Ray and asked for his help in developing recipes for Back Forty Beer Co.

The goal for the liquid was simple – to expose Southerners to the same craft beer culture that Wilson had been part of for the last ten years. This meant starting out with classic beer styles and evolving with customers along the way. Jamie agreed and in January of 2009 he became Back Forty’s first employee.

In June of 2009, Back Forty released its first offering, Naked Pig Pale Ale. The beer was only available in the North-Central Alabama home market, but the response was overwhelming. In March of 2010 the second Back Forty offering hit the shelves, Truck Stop Honey Brown Ale. Later that year Truck Stop Honey was awarded a Silver Medal at the Great American Beer Festival, and in the weeks following, distribution offers poured in that allowed Back Forty to expand its coverage throughout Alabama.