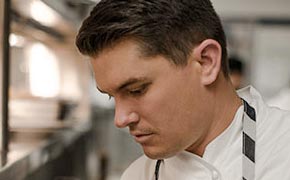 The Island Hotel in Newport Beach has a history of offering distinctive destination dining. As part of a major refreshening of the property The Oak Grill and Aqua Lounge have just debuted in the space that was previously the well-liked Palm Terrace. This was an over 5-month redo on a major budget…This is easily the most anticipated opening of the year in Orange County.

The Executive Chef is Marc Johnson and the seasoned General Manager is Miguel Rodriquez. Both moved over from the popular Mastro’s Ocean Club in the Crystal Cove Promenade on Newport Coast.

Chef Mark was previously with Studio’s (Montage Laguna Beach) opening executive chef, James Boyce for several years and then followed him to Huntsville, AL to help open Cotton Row (as chef de cuisine,) one of the most recognized restaurants in Alabama.