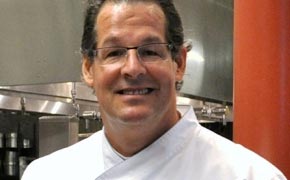 Spencer’s Restaurant at The Mountain is consistently one of the most popular and favorably reviewed restaurants in the greater Palm Springs area. Since 2008 the secret has been the culinary talents of Executive Chef Eric Wadlund in the kitchen. Their relaxing Sunday Brunch is top of the mind with the locals. Their specialty is “Benedicts.”

Chef Eric was just four when he whipped up his first culinary delight: doughnuts. His father owned a bakery (Butterball Bakery) and taught him the tricks of the trade, and, most of all, to love food and cooking.

His banana cream pie is a locals’ favorite and all the ice creams and sorbets are house-made.

By the way, he’s cooked for the President, too, at Sunnylands (the former Walter Annenberg Estate.)