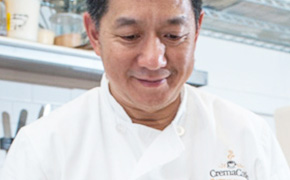 Tarit Tanjasiri is the consumed baker/proprietor of the revered CremaCafe & Artisan Bakery in Seal Beach. It started eight years ago as a small breakfast and lunch spot. Tarit couldn’t source a bread for his sandwiches that satisfied him so two years ago he added an adjacent production bakery. It’s the café on one side and the bakery on the other. We’ll meet him.

According to Anne Marie Panoringan of the OC Weekly : “Per Tarit, a Kouign Amann is a pastry from the Brittany region of France. It’s often considered more of a cake than a pastry, although Crema utilizes croissant dough for their version. Layers of butter, dough, sugar and a bit of sea salt are formed. Shaped to resemble a blooming rose, it is then placed in the deck oven to bake. Sweetness and density are much higher in France, and they come in many more sizes, shapes and filling flavors.”