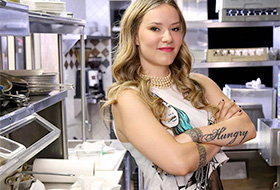 Chef-comedienne Nadia G. is widely known as the creator and host of “Nadia G’s Bitchin’ Kitchen,” a brand defining series for Cooking Channel and the first ever online show to successfully transition from the internet to primetime. She also hosts an original online design series, “Sick Kitchens,” and is the author of two bestselling cookbooks.

Her new primetime Cooking Channel series is “Bite This.” It’s a fusion of food, travel and comedy following Nadia as she travels the nation featuring the coolest chefs and finding hidden gems and signature flavors in each city – from Los Angeles to Harlem and the Bronx, to Louisville to Nashville, Chicago, The Hamptons, Silicon Valley and more.

The always unpredictable Nadia G. (who also plays guitar) is our guest.