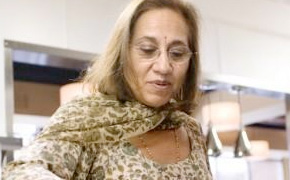 Indian cooking authority, Chef Neela Paniz, grew up in Bombay, India and is fondly remembered by Angelenos as the executive chef and co-owner of the landmark Bombay Café in West Los Angeles which she sold a number of years ago before moving to Napa. In Napa she oversaw a contemporary Indian restaurant, Neela’s. Her new cookbook is The New Indian Slow Cooker.

On Food TV Paniz has competed on Food Network’s “Chopped” and was the winning chef of her episode.