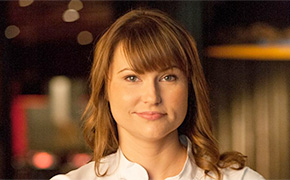 Chef Holly Jivin of The Bazaar by Jose Andres at the SLS Hotel at Beverly Hills has just been promoted to Chef de Cuisine. She has been part of The Bazaar’s culinary team since the restaurant’s opening in 2008.

Chef Michael Voltaggio (Bravo’s “Top Chef” and Ink and Ink Sack) originally hired Chef Holly before he moved on to establishing his own restaurants.