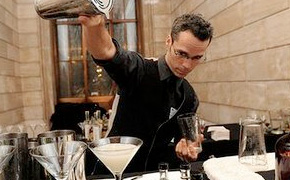 The Museum of the American Cocktail (MOTAC) presents “Cocktails for Peat’s Sake! Scotching the Single-Malt Taboo,” the next edition of Touring the Cocktail:MOTAC Los Angeles. The seminar takes place on Monday, Oct. 20th at 6:30 p.m. at The Three Clubs in Hollywood. The evening is hosted by cocktail expert Michael J. Neff.

“Join The Museum of the American Cocktail and cocktail expert Michael J. Neff for an exploration of the ways in which single malt whisky can elevate mixed drinks. Classic and modern ideas will be evaluated and sampled under the direction of Michael Neff, playwright and author who opened the famous Ward III and Rum House in New York. Mr. Neff’s cocktails have been featured in the New York Times, Wall Street Journal, and other publications. We are pleased that he will be serve as both presenter and drinkmaster.”

“The Three Clubs, a classic 1950s cocktail lounge and one of Hollywood’s secret delights, will host and serve a light dinner as well as gourmet chocolates.”