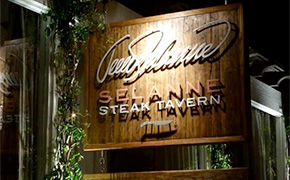 Selanne Steak Tavern in Laguna Beach debuted with a splash about a year ago. It’s been a really great inaugural year. At the recent Golden Foodie Awards Selanne was the recipient of “Best New Restaurant” (an award decided by peers) and the people’s choice award (decided by popular vote)for “Best Steak.”

Leo Fenn is the Operations Director.