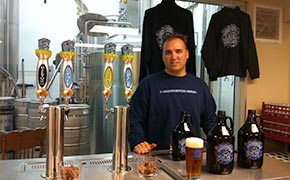 In 2011 the El Segundo Brewing Co was created out of a love for beer. Hoppy craft beers are their signature. Rob Croxall, proprietor and brewer, was a hard-working aerospace finance guy who left a cushy corporate finance job with great benefits to risk it all on craft beer. Fortunately it’s all been good. Rob says all the time, “My worst day here, still beats my best day there.” By any objective measure that is success!

“So…we LOVE hops. To most people that means bitter beer. To us hoppy doesn’t particularly translate bitter. Here at ESBC we prefer to showcase the aromatic and flavor compounds of those glorious flowers. Our beers have firm bitterness, but tend to be more restrained than other West Coast IPA’s. We employ a dry-hopping regimen that borders on lunacy, which results in some very aromatic beers.”

ESBC’s most popular style (it’s also served at Dodger Stadium) is the Blue House Citra Pale. It’s available year round. “The base is very similar to the very straightforward Blue House Pale Ale. This beer is a real crowd-pleaser because its up front fruitiness, and restrained bitterness.”