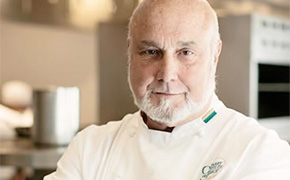 Chef Larry Forgione has been called “The Godfather of American Cuisine” for his role in changing the way Americans eat today. He embraced the virtues of our national cuisine and used only seasonal, local ingredients, beginning the entire “Farm-to-Table” movement in the early 80s in New York. He was mentored by the late James Beard who frequented his restaurant his Greenwich Village restaurant, An American Place.

So when the Culinary Institute of America (The CIA) was developing its American Food Studies: Farm-to-Table Cooking curriculum, it was only natural that the college teamed with Chef Forgione, who became the program’s co-founder and Culinary Director. Today he guides students through their farm-to-table studies and their hands-on experience at The Conservatory at Greystone, a student led restaurant in the Napa Valley open to the public.

Chef Forgione was one of the guest chefs at last weekend’s Friends of James Beard Weekend at Morgan’s in the desert at The La Quinta Resort hosted by Chef Jimmy Schmidt.