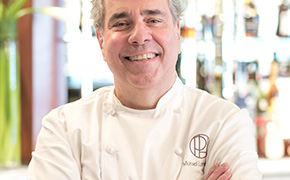 Michael Lomonaco, Chef and Managing Partner of Porter House Bar and Grill, has dedicated his life to the American kitchen, celebrating the generosity and abundance of the American spirit with food that is equally bountiful, bold and filled with flavor.

A native New Yorker and veteran of the New York restaurant scene, Chef Lomonaco has brought his cuisine and leadership to some of New York’s most iconic restaurants. Along with returning glory to the storied ‘21 Club’, reviving the reputation to the magnificent Windows on the World and the memorable Wild Blue, Chef Lomonaco has been a well-respected, long-term participant in New York’s food world.

Chef Lomonaco serves on the Board of Trustees of The James Beard Foundation.

In 2006 Chef Lomonaco teamed up with Kenneth Himmel, an esteemed developer and restaurant operator, to bring Porter House New York and the neighboring Center Bar to the Time Warner Center.

Chef Lomonaco is hands-on and spends most of his time at the restaurant. Be sure to say hello the next time you’re in New York. Mention that you heard him on the “SoCal Restaurant Show.”