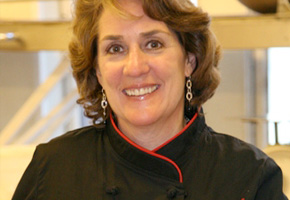 The Berghoff is a celebrated institution in Chicago and was inaugurated as a James Beard America’s Classic establishment in 1999. It’s also prominently featured in the new book, James Beard’s All-American Eats – Recipes and Stories From Our Best-Loved Local Restaurants. Carlyn Berghoff, representing the fourth generation of proud Berghoff Family stewardship, is our guest.

The Berghoff first opened in 1898 as a men-only saloon whose sole menu items were the corned beef sandwiches served free with the purchase of a stein of the German-born owners’ proprietary beer. Over the years the spot evolved into a beloved full-service restaurant famous for traditional German fare like wiener schnitzel, knockwurst, spaetzli, and creamed herring.

The Berghoff was briefly closed in 2005 by its third-generation owners, but the restaurant’s basement café resumed business shortly thereafter, and in 2007 the entire restaurant again opened its doors and revealed a new menu that features several less iconically Bavarian items.

Although some of the dishes might be lighter, the restaurant still sells its famous Berghoff Root Beer and hosts an annual Oktoberfest. Berghoff also operates a café at O’Hare, serving sandwiches and beer.

Carlyn is also the author of three Berghoff-related cookbooks. Her most recent effort is Cooking for Your Gluten-Free Teen: Everyday Foods the Whole Family Will Love. It’s told from Carlyn’s and her teenage daughter’s, Sarah’s, perspective.