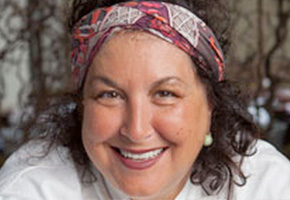 Chef Carrie Nahabedian is one of the pillars of dining in Chicago. After departing her position as Executive Chef of the Four Seasons Hotel Los Angeles at Beverly Hills, Carrie Nahabedian returned to her native Chicago to open NAHA in 2000, which garnered her a James Beard Award and four consecutive Michelin stars. Chef Nahabedian continues with us.

Brindille (Chef Carrie’s latest venture), named “Best New Restaurant in 2013” by Chicago Tribune, offers a glimpse into refined Parisian cuisine and atmosphere from the team that brought you NAHA. It’s Dinner, only.

In 2015 Brindille was awarded the James Beard Award for outstanding Restaurant Design (for an establishment under 75 seats.) It’s all of 30 seats.