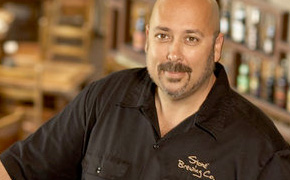 Bill Sysak, or as he’s more often referred to as, “Dr. Bill,” is the Craft Beer Ambassador for California’s Stone Brewing Co. Dr. Bill is a Certified Cicerone, and has a demonstrated expertise in selecting, acquiring, and serving craft beers. He’s our always-thirsty guest.

“Take two Stone and call me in the morning.”

He received his nickname through his work as a combat medic in the military Army National Guard, and the moniker has stuck with him throughout his career in the craft beer industry. At Stone, he’s responsible for setting the beverage standard and ensuring the beverage philosophy is followed at all Stone Brewing Co. venues.

Kelsey’s is the newly renovated all-American pub at Pechanga Resort + Casino with a specialty in barbequed meats and a rotating selection of craft beers on tap. (Pechanga will be hosting their 8th Annual Pechanga Microbrew Festival and Chili Cook-off on June 11th.) Stone Brewing Co. is well represented there. Dr. Bill suggests appropriate food pairings with the Stone selections at Kelsey’s along with basic tips for inspired beer and food pairings.

Stone’s latest effort in California in bringing craft beer and food together is a future tap room, restaurant, and micro-brewery in the historic Borreo Building in Napa. It’s circa 1877.