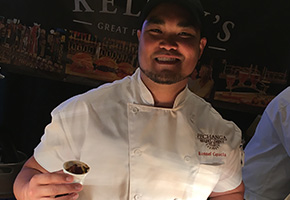 Ronnell Capacia is the chef at Kelsey’s – Great Food & Drinks at Pechanga Resort and Casino. Last year his chili creation was the runner-up.

For 2016 he’s back with a new recipe. All we know for sure is that the revised creation uses Golden Road Brewing’s Get Up Offa That Brown, a toasty brown ale, in the recipe. We’re sure there will be a side of house-prepared corn bread, too. We’ll learn a bit more in our chat with Chef Capacia.

The revamped Kelsey’s is an all-American pub with a fine flair for hand-cut, barbequed meats and an outstanding, rotating selection of premium craft beers.

Kelsey’s restaurant is named after C.E. Kelsey, a progressive U.S. Bureau of Indian Affairs agent assigned to work with and address concerns of California tribes in the early 1900’s. In 1907, the U.S, government purchased 235 acres (with a sustainable water source) to be added to the Pechanga Tribe’s land. This came to be known as the Kelsey tract on which nearly 100 years later, Pechanga Resort & Casino would be built.