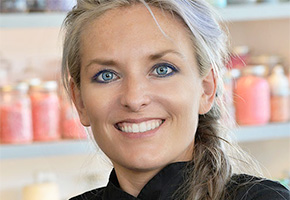 Chef Maeve Rochford is the proprietress of the ever-popular Sugar & Scribe Bakery Café in La Jolla. She is also the winner of Food Network’s “Holiday Baking Championship” and the cool $50,000 cash prize. Chef Maeve is our guest.

“Born an only child in Cincinnati, Ohio to an Irish-born mother and third generation German Father, Maeve’s life was destined to be greatly influenced by food! She attended an all-girls high school, St. Ursula Academy, and rowed her way into college. After graduating from Boston University on a rowing scholarship, Maeve started her career quest!”

“After college Maeve struggled to settle on a direction. She checked out a few career paths in NYC and then spent several months in South Africa. While cooking dinner for the family she was living with in Walvis Bay, it finally became clear: “I’M A CHEF!” Looking back, Maeve realized she had been on this path since she was two. She moved to Los Angeles and landed her first job as a private chef. It was Maeve’s husband’s career that brought her to San Diego.”

“With the move, Maeve started all over again, but this time she followed her passion, threw caution to the wind, and in the middle of a major recession, opened Sugar and Scribe, a small upscale bakery in Pacific Beach on a shoestring budget. Sugar and Scribe launched in November 2010. The current Sugar and Scribe location opened in La Jolla in February of 2015.”

“Maeve’s love of food and the memories that great foods inspire drive her to create morsels of excellence every day. “I think my keen understanding of flavor combinations comes from mixing leftovers, never being afraid of food and loving the experience of cooking. When I’m happy, I eat. When I’m sad, I eat. When I’m angry, I eat. So it’s important to have great food for every emotion!””