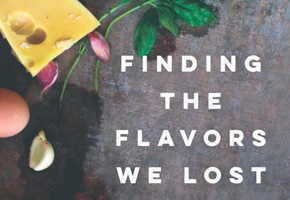 We hear the word “artisanal” all the time—attached to cheese, chocolate, coffee, even Subway sandwiches—but what does it actually mean? Now, from Los Angeles Magazine restaurant critic and multiple James Beard Award winner Patric Kuh comes FINDING THE FLAVORS WE LOST: From Bread to Bourbon, How Artisans Reclaimed American Food. It’s an arresting exploration of the cultural demand for “artisanal” foods in a world where corporate agribusiness has co-opted the very concept. Patric is our guest.

Spanning almost the past hundred years, Kuh begins with the stories of countercultural “radicals” in the 1970s who taught themselves the forgotten crafts of bread, cheese, and beer-making, moving back to the development of mass-produced food and giant corporations that spurred them on, then to the present, hearkening back to how these 1970s trailblazers became the inspiration for today’s crop of young chefs and artisans.

From a cheese-making farm in Wisconsin to the Maker’s Mark distillery in Kentucky, Kuh examines how a rediscovery of the value of craft and individual effort has fueled today’s popularity and appreciation for artisanal food—and the transformations this has effected on both the restaurant menu and the dinner table.

Throughout the book, he raises a host of critical questions. How big of an operation is too big for a food company to still call themselves “artisanal”? Does the high cost of hand-crafted goods unintentionally make them unaffordable for many Americans? Does technological progress have to quash flavor?