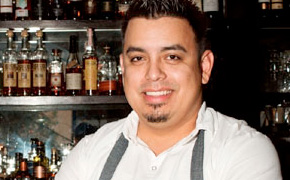 In addition to changes in the kitchen, Michael’s on Naples is experiencing an aesthetic transformation as well. The restaurant’s rooftop terrace has been under construction as it undergoes a major expansion and renovation. The Rooftop (opens July 20th) will now have its own kitchen along with a separate menu featuring more casual fare and shareable plates.

The main floor’s menu will focus on the nightly changing Chef’s Tasting Menu and the five-course Pasta Tasting. The Michael’s on Naples tradition of suggesting inspired wine and food pairings will continue.

Chef Samaniego, who began his career working for the late Charlie Trotter in Chicago, joined Michael’s On Naples in April working under the tutelage of former Corporate Executive Chef David Coleman. A graduate of Johnson & Wales University, Samaniego is a native of Southern California with his formative years spent in the Central Valley. His culinary credits include a seven-year stint with David Myers working at the high profile Sona and Comme Ca (both now closed) in Los Angeles.