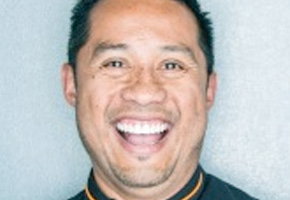 Carlito Jocson is the long-time Executive Chef and Managing Partner of Yard House. He revamped the entire menu of the original Yard House in Long Beach right before they opened in 1996. It’s been a wild ride for the last 20 years. They now have 65 busy locations across the country in 13 states.

What do Fried Gnocchi with Spicy Sausage, Crab Scampi Pasta and an All-Day Breakfast Sandwich have in common? They’re just a few of the new items that Chef Carlito and Yard House introduced to its menu on September 12th . The restaurant, known for its menu of American favorites and 100-plus taps of beer, introduced a half-dozen new entrees to its menu, which will be available through January 15, 2017.

“As summer starts to wind down, and we head into the cooler months, it’s natural for the palate to gravitate towards heartier fare,” notes Chef Carlito Jocson. “Our Lobster Mac N Cheese, which has appeared on some of our special menus over the years, like Valentine’s Day or the holidays, is one we’re bringing back because it’s so popular. And, for the first time in our nearly 20-year history, we’re adding a breakfast sandwich.”

Jocson added that as a chef he studies food culture behaviors rather than trends, which helps drive his decision on what he feels needs to be added to the menu.

“I’m out a lot, and I observe what types of food people are seeking out,” added Jocson. “When I’m in Downtown L.A. late at night and there is a line halfway around the block at a chef-driven kiosk for a simple egg sandwich, I immediately start experimenting in the kitchen to create an egg sandwich for Yard House to answer that call for our guests.”

Chef Jocson also noted that, while Italian and Mexican fare have always been dining staples they’re both experiencing a resurgence among diners.

Chef Carlito joins us with this absolutely incredible success story.