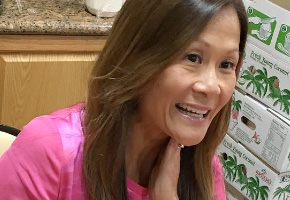 Katie Chin’s Everyday Chinese Cooking is a celebration of Leeann Chin’s amazing mastery of the complete array of flavors and techniques in Chinese cuisine, and her unique ability to make them accessible to Westerners. Katie provides tips and techniques which allow anyone to create a refined and tasty Chinese meal at home.

The “SoCal Restaurant Show” has tasted the unusual Five Spice Chocolate Cake and it’s a winner!

Katie Chin was born and raised in Minneapolis by her award-winning restaurateur mother, Leeann Chin. She is the co-author of Everyday Chinese Cooking (Clarkson Potter, 2000) and author of 300 Best Rice Cooker Recipes and Everyday Thai Cooking. She was co-host with her mother, Leeann, of the 2003 national PBS cooking series Double Happiness. Katie has served as a guest judge on Food Network‘s Iron Chef America and appeared on Cooking Channel‘s Food(ography) program in 2013.

When not testing out her new recipes on family and friends, she divides her time as a private chef, caterer and culinary consultant. Katie has been called the “Asian Rachel Ray” by many of her fans because of her sparkling personality and approachable style.