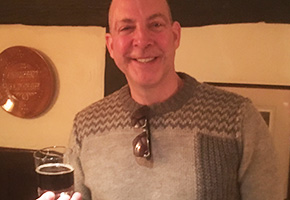 In late 2014 he joined the brewing team at the fast-growing Golden Road Brewing and is now their brewmaster.

“In 2011, beer enthusiasts Meg Gill and Tony Yanow founded Golden Road Brewing to bring fresh beer to the local market in the most sustainable way possible. Golden Road is committed to engaging and supporting the growing community of socially-minded beer enthusiasts.” “Golden Road’s year-round offerings include Point the Way IPA, Golden Road Hefeweizen, Get Up Offa That Brown and Wolf Among Weeds IPA. Along with the core beers, Golden Road brewers are constantly experimenting with the freshest ingredients through a collection of rotating, seasonal and limited-edition brews including the Custom IPA Series, a line-up of diverse, hop-forward IPAs.”

A new brewery in Anaheim (across E. Orangewood Ave. from the South entrance to Angel Stadium) with a Tasting Room was added this year with a rotating selection of 20 styles on tap. Victor uses the original 15-barrel system from Golden Road’s original L.A., brewery. Eventually the evolving facility will include a full-service restaurant.

Head Brewer Victor is tapping a fresh keg with us.