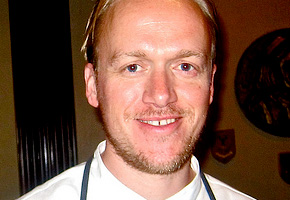 Ryan Wilson is the Vice President and Executive Chef for Lawry’s Restaurants, Inc. the parent company of SideDoor and Five Crowns. He represents the 4th generation of Frank/Van de Kamp Family ownership.

Before pursuing his culinary ambitions around the world, Ryan grew up creating dishes for his mother and sister. He officially stepped into the family business in 2002 as the prep cook at the Tam O’Shanter and later transitioned to the Five Crowns kitchen as a line cook.

After following culinary opportunities outside the Lawry’s realm, he returned as the opening chef for The Prime Rib restaurants in China and Japan. Stateside, he served as opening chef for Lawry’s Carvery at L.A. Live and in 2008 returned to the Tam O’Shanter as Executive Chef.

During his time at the Tam O’Shanter, Ryan worked closely on the concept and execution for SideDoor in Corona del Mar and later became the Executive Chef for both SideDoor and Five Crowns. In 2014, Ryan assisted in opening the SideDoor gastropub in Chicago and remains focused on providing the highest quality food service available through his corporate and operational roles.

Chef Ryan’s responsibilities have grown to include the operational oversight of the six licensed Lawry’s Prime Rib locations in Asia and the future growth of Lawry’s international and domestic portfolio.